What a fabulous day we had yesterday in London! Philippa was dancing at the Royal Albert Hall in Mardi Gras. It was a long day - here's what we got up to :)
4.30 alarm :( up and ready - Philly had a whole days worth packed lunch with just a few treats. The coaches picked us up from Nuneaton Dancecentre with all the girls (and one lad) one one coach and the parents on the second. It was an early start and we did have a breakfast stop but we arrived at the Royal Albert Hall at 9am. 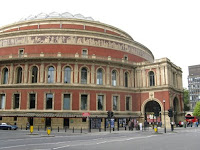 The dance team were spending the whole day there, rehearsing their routines, getting used to the larger stage (it was huge compared to their dance school floor - and round not square) and learning the two finale songs and dances. There were 24 dance schools taking part with most being at least 40 strong - you can image the noise and atmosphere in there all day :)
Nick and I went off round London. We walked through Hyde Park and were lucky enough to pass the Knightsbridge Barracks where the Household Cavalry Mounted Regiment (HCMR) are based, and they were just leaving to parade to Buckingham Palace for the Changing of the Guard. The horses were stunning, jet black and so well groomed they shone. 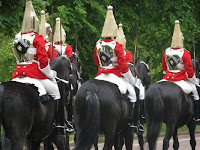 We walked to Hyde Park Corner and over to The Dorchester hotel - it always looks stunning and at the moment has yellow and white window canopies which were matched to yellow and white flowers in the garden - stunning. To add to the sight were two elephants - in fact we saw lots of these around London. They are for sale by auction in aid of the Elephant Charity, so clever and such a great fundraising idea. 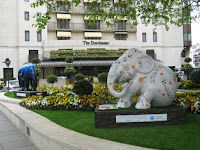 Nick and I carried on to the British Museum where we spent a few hours looking at the finds such as Sutton Hoo.We then walked on to Holbrn and had a lovely lunch at Cafe Rouge - I had a huge bowl of mussels, so yummy. They were very good, the food arrived at just the right moment so we had a leisurely lunch, not rushed but not left waiting. To be honest I could have sat there all day :)
More walking - this time to Doggetts Coat and Badge, our favourite pub right on the Thames next to Blackfriars Bridge. We spent a nice hour or so enjoying a bottleof wine - good job too as it was pouring down outside lol.We took the Tube back to the Albert Hall - good job as we'd walked over 5 miles already, and just as we got off the Tube my left ankle went. It's a bit painful but not too bad.
After a wonderful day things could nto get better BUT they did - we had bought tickets in the circle which is the fourth floor up. When we gave the tickets to the theatre man he asked if we were just two, and when I said yes he said would we likeot be upgraded to better seats and gae us tickets for the stalls. We went downstairs not sure what was happening,only to find ourselves right by the dance floor in Row 7. I have no idea why we got the tickets but they were perfect.
The inside was huge but the centre area was smaller than we'dimagined. It is certainly a feat when they do the Remembrance Night there. Anyway the show was the perfect endto a perfect day.Nick Greenshields was the compare and he wasso kind to all the youngsters, telling them his background and being really encouraging. He is even going to try to get a grant sorted for an 18 year old who sang for her dance group - she has a place at a top London college but has no grant so cannot go, he promised to try to find some help for her.
There were 24 danceschools - 12 in each half. Philippa's team danced 10th. There were 1700 dancers altogether and they were all on stage at theh end of Act One and again Act Two. Here are the photos: 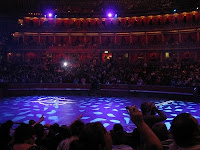 We should have been right at the top of this picture, above the lights - yes really that high - and look where we were. 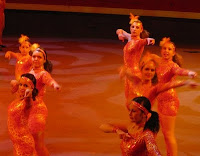 The spotlight fell just on Philippa :) but allthe team were fantastic. 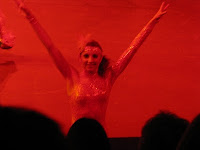 And her teams' finish ....... she finished right in front of us - what a night (God moves in mysterious ways), I love this photo, she is looking straight at us with a huge smile :) 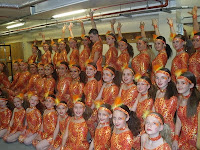 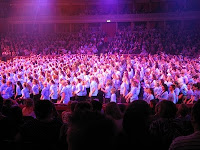 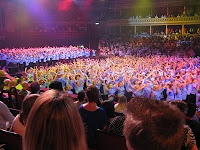 This is the Finale - they all danced together, all 1700 of them.
We all had a fabulous day - and arrived home about 1am. We've all had today off which I think was a good idea as Philippa has her exams soon. To everyone who was involved yesterday, the Dance School, the coach company, everyone in London, all the dancers who performed and especially to Philippa "Thank You" I had an amazing time.
Written by Clare-Aimetu 11 comments:

Over one in Wales :)

We have been to our caravan for the Bank Holiday weekend. It was surprisingly quiet, not many people around at all. The weather was good but such a cold wind. We have a long horse lead which we use to take Ruby on the beach for a run, you can see how much she enjoys it (sorry about my fashion sense lol) 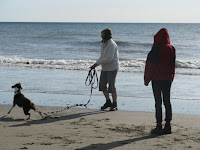 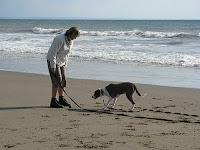 On Friday I did the MS Society Cake Bake at school for the staff as it was our teacher training day. All last week I baked a few cakes each night. They looked great all laid out but they didn't last long. 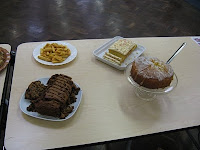 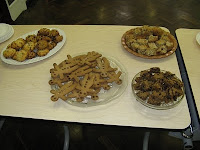 Thanks to my brilliant colleagues I raised £80 - thanks everyone it was a fab day :)
Over the weekend I have done some stitching. I have taken part in the GOS Challenge #6. I did not have a varigated red thread so used a dinky dyes pink. I stitched it over one and made a scissor fob. I did not have any stuffing at the caravan so used a bit of rice lol. (sorry Blogger has turned my photo again - one day I'll work out why - I've tried everything both on the camera and the pc lol) 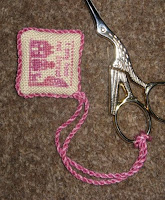 I don't think I've anymore news although I do have the feeling there is something I forgot.... oh yes just another photo of Ruby enjoying the garden sun - well a bone actually. 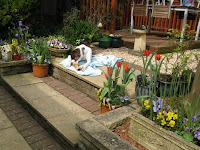