We went to Nottingham today to see my stitchy friend Melanie. She had a beautiful baby girl, Elizabeth, quite a few weeks early and Elizabeth only weighed 3lb 2oz.
She is now out of the incubator, has no drips and weighs nearly 4lb. Melanie is doing well too. Elizabeth is tiny but gorgeous.

This is the stitching gift I made for her. 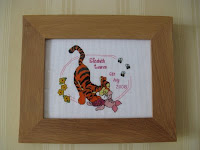 We are off to our caravan tomorrow for a week. Have a good week, happy stitching.
Written by Clare-Aimetu 4 comments:

I do love my hubby

He's such a star - he has found and bought me a cable to connect my mobile phone (it's a few years old) to the pc to save my photos. When we were in Holland in 2005 it was the only way we could take photos on our day at the zoo as the camera batteries ran out (typically). I have been so worried that if my phone died I would lose these and other photos but hubby came to the rescue :) 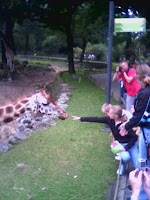 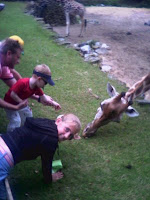 We were amazed how open the zoo was - look how close Philippa was to the giraffes. 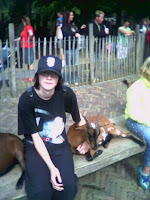 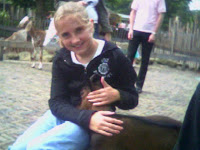 This was pets corner, Michael and Philippa loved this part, the goats were so cute and very, very tame.


The zoo was at Emmen and was fabulous, there were no tiny cages and in the centre there was a huge area of open space with giraffes, zebra and many other animals all roaming free. The edge of the area had been loser and a high wall built before the ground leveled off for the public (I'm not very good at explaining that but you can see it on the giraffe photo) This is their web site but it's only in dutch or german, you can still get the idea though. 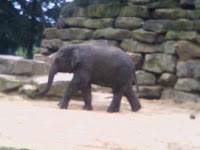 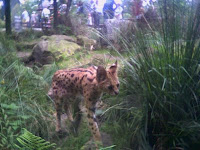 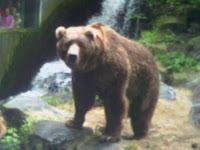 this is a photo of my baby boy who we sadly lost last August, the house and caravan are certainly a quieter place without him. He was a cheeky chappy who made sure everyone knew he was there and fussed him, including the mum's at the school gate - he would nudge their hands if they didn't notice him LOL. 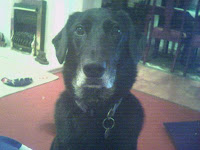 So thanks to hubby I now have all my phone photos and as you can see some are very special indeed.
Written by Clare-Aimetu 3 comments:

Elisa has given me this award - thanks hun you're an angel.

The rules are simple:

1. The winner can display this ward on their blog
2. Display a link to the person you have got the award from.
3. Nominate at least 7 other blogs, you like.
4. Set the links to the blogs on your blog.
5. Leave a comment on the blogs you have chosen.

The blogs I have nominated, are just below....

Chris at Chris Cross Corner
Sharon at It's Daffycat
Kathy at Kathy's Kreations
Elaine at Lainey's Stitching House
Helen at Stitchery Nook
Jacqui at Smokin' Needles
Nicola at Tales from my Needle
Written by Clare-Aimetu 2 comments:

Life is a garden 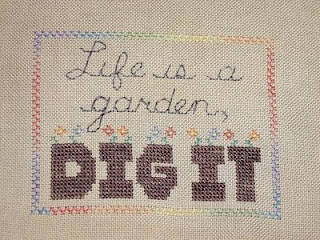 This was my Kit Exchange at the Nuneaton Meet Up I organised back in April. I have only just finished it tonight, mainly because I've had so many other things to make. I am going to turn it into a small hanging.

It's the final week at school this week, I can't believe I have been there over 6 months. I don't miss college at all and am so settled in my new job. It will be nice to start in September as then I can plan a whole year and not just pick up someone else's work.
And big bonus with my new job is the 6 weeks summer holidays. I am away most of it - either at our caravan or in France but I will try to post up when I get a chance. 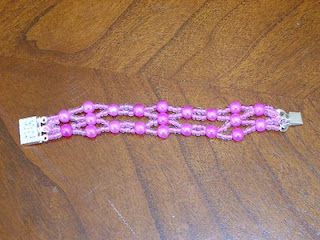 It is my friend's little girl's birthday on Saturday so I made her a little bracelet too.
I have a blue and silver bracelet to make over the weekend for a colleague who is moving schools. I'm quite enjoying all this beadwork.
Written by Clare-Aimetu 2 comments: 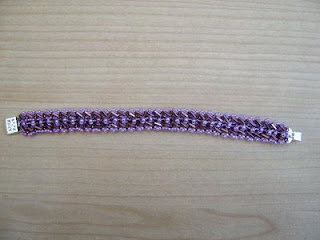 My friend at work is 30 today so I made her a beaded bracelet.
Lilac and purple is her favourite colour but as it's mine too it was very hard to hand the gift over - hee hee.
Added post
I have just got back from our District Scout AGM and I was presented with my 20 years service badge and certificate. It is a little late as I have nearly completed 25 years but still an honour to receive it, and have another badge to sew onto my uniform. 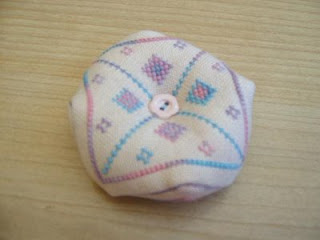 I received a beautiful biscornu from Jacqui in the Biscornu Exchange. I've had it a while but opening day wasn't until July.
I have sent mine to Kathy and can now show it as I know she has received and opened it - I wouldn't post before as I didn't want to spoil the surprise.

I have finally finished all the bracelets, towels and banners for the schoool's performance of Joseph - the performances are next week - I'm sure they will all do well - I can't wait to watch. I can now get on with some of my own stitching although I have two bracelets to make for friends birthdays.
We're off to our caravan again this weekend although the weather forecast is a bit mixed. I quite enjoy it when it's raining and we're all cosy inside the caravan enjoying a glass of wine and having lots of stitching time.