We had two Christmases this year, a family one on the 22nd and another on Christmas Day. Our daughter, who lives in Wales, came home for the weekend before Christmas to celebrate Hubby's birthday and to have Christmas.

Hubby's birthday was a lovely day, we (Hubby, me, our sons, our daughter and her boyfriend) visited our family church to see all the trees - they were amazing.


In the afternoon we (not our son) went to watch Wasps v Harlequins rugby with a firework spectacular after the game. It was a little cold, bit wet but superb fun.


Sunday 22nd we had our Christmas, opening pressies, walking to the club for lunchtime drinks, Turkey dinner with all the trimmings, Cludeo crackers and party games at night. It was a super day.

It felt a little to still have Christmas Day coming,  a second time for festive fun. There was eight of us here for Christmas dinner; my mum and stepdad, Hubby's mum, his sister, her son, our son and of course us (chief cook and bottle washer).

Thank you to my stitchy friends for your beautiful gifts, it's very kind of you all.


Sadly I have some news that I didn't want to share before Christmas; on 6th December I was diagnosed with  breast cancer. December was a very tough month with so many blood tests, scans and injections. I have a severe needle phobia which has made each hospital visit quite traumatic, the week before Christmas I had appointments every day.

Yesterday I had an operation to remove 3 lymph nodes (I had to go to Coventry first for a radioactive injection, then Nuneaton hospital for the operation). The incision was below my left armpit, it's glued so no stitches to remove and isn't painful, just sore.

The plan is to now start chemo for 8 treatments (I am struggling with the fact that the lump is still there), I have had a new short hair cut ready for when my hair starts to fall. There will be many tests and scans and needles along the way to make sure the chemo is working, after which they will remove the footprint- lumpectomy. That will all take about 6 months. I need to have a titanium clip inserted first, that's my New Year's Eve treat !

As always things come at once and we have Nick's mum living here alternatively with staying at his sisters. Her partner was taken ill in October and passed away (cancer) in November. She is struggling with it all, hard any age but she is 83. She cannot stay in their bungalow as it's in a small village with one shop, no bus and she no longer drives. In the future she will buy a bigger house with Nick's sister but at the moment it's hard as I cannot have her here all the time with my appointments, operations and chemo treatment.

The memories we made over Christmas time are so special, we had some lovely times which helped me forget about hospitals and needles, if only for a few days.

My diagnosis is why I could not post up for Jo's Advent Blog Hop, I have visited some of the blogs (I hope to visit them all) and I'm hoping to join in with Jo's Gifted Gorgeousness and Hops in 2020

Wishing you all a Happy New Year 🥂 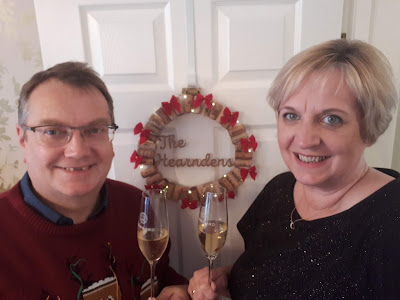 This year my tree at St Laurence's Church Christmas Tree Festival is called 'The White Tree' and has, not surprisingly, only white ornaments, lights and tinsel.

Over the past year I have been making hardanger ornaments. In total I made over 30 and my dear friend in America sent over some she made for me, thank you Dusty.

The tree is completely white but the lights are showing blue on my photos. I loved doing this tree, especially the angel. I bought one from a charity shop and recovered her with white satin and hardanger. 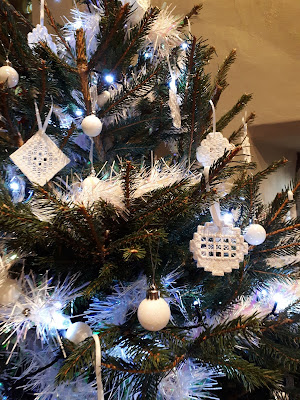 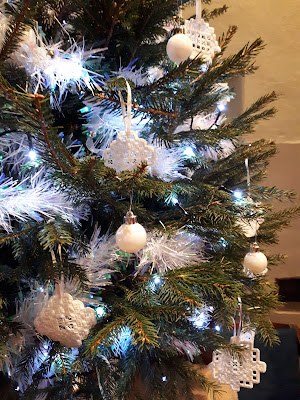 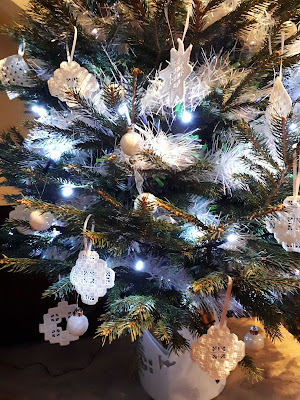 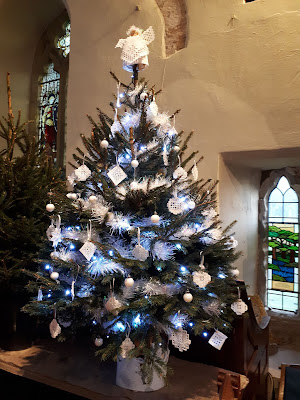 Margaret, who organises all the church events asked me about hardanger and how long each ornament had taken. I made a few at a time so it was hard to tell but I guess each took between 4 and 5 hours. I sent Margaret an email with a bit of history I found online at Nordic Needle.


Hardanger Embroidery is named after a region in southwest Norway in the county of Hordaland by the Hardanger Fjord. However, it is thought to have originated from the Middle East. From there it spread to Europe with ties to the Reticella and Venetian needle laces. Reticella is a very geometric style with foundations in squares, diagonals, triangles, and arcs. Venetian lace dates from the 16th to the 19th century characterized by deep, acute-angled points stitched in separate pieces and linked together by a narrow band with buttonholing.
How did it get to Norway?
The Norwegians of this particular region were seafarers and traders, traveling to countries where they were introduced to new skills and ideas. Over time, the individual lace forms of cut and drawn work evolved into what we know today as Hardanger. Many of the locals were farmers and they grew the raw materials necessary to produce their cloth goods. Sheep provided the wool and linen was produced from flax. Both were woven into fabric. The linen was often left in a natural color. Various organic materials were used to dye the wool. One of the natural materials used was cudbear (a lichen that only grew in Norway and Sweden) which produced a very specific shade of purple. While today’s Hardanger fabric is usually a 22-count, these brave Norwegian ladies worked on 50-count linen! The Hardanger Embroidery was traditionally done white-on-white or ivory. The women used the designs for decorating linens, ecclesiastical pieces, clothing and aprons worn with the traditional folk costumes.
Last Saturday would have been my Dad's 93rd birthday so we went to church to place some roses and to my surprise Margaret has printed my email about this form of embroidery and put it in a frame next to my tree so everyone can read about it.
I love taking part in this annual festival, the church always looks amazing with each one of the 60 real trees decorated by local businesses, charities and friends of the church all in different themes.

I already have plans for next year's tree, I'll be posting about my idea in the new year so keep reading, it may be something you'd like to join in with too.


Wishing you all a Merry Christmas

This time of year brings Needlecraft Haven's Christmas Exchange. Although I organise most of the exchanges this one is hosted by Christine.

It was a secret exchange so we couldn't sign our cards, although by now I recognise most people's handwriting or post code and Christine certainly knew who her parcel was from as she arranged the partners hee hee.

Opening Day was 1st December but one parcel was delayed so we have only just had the Reveal which is why I am posting a little later.

I received a lovely parcel from Gill; beautiful holly fabric, snow balls chocolates and mince pie fudge. My ornament is beautiful, Santa checking his list (I hope I have been good). Thank you Gill for a super Christmas Exchange parcel.

My parcel went to Christine. The chart I stitched for our daughter (there's a photo in my last post) came as a set of three designs and I thought this one perfect for the exchange.
I made a card using a card from last year, I have quite a few and might make some more in the spring ready for next year. Anyway as well as the card I included some Christmas fabric, two skeins of thread and some Lindt mint chocolates. It was a pleasure to put together the parcel, I love doing this exchange.
Thank you Christine for organising another super Exchange for Needlecraft Haven, Merry Christmas everyone x x
Written by Clare-Aimetu 5 comments:

Christmas is a coming

Happy December everyone ... it time to start the festivities, although life is a little different for us just now.

Sadly my Mother-in-law's partner passed away earlier this month, they had been together over 22 years. They lived in a small remote village and for various reasons, mainly because she no longer drives, she will be moving to be nearer us and Hubby's sister, brother and our families. At the moment she is living with us and occasionally staying with Hubby's sister, a different life for us all.

John was a big part of our family and shared many happy times with us all as you can see from these photos, he'll be very sadly missed. The huge family group was my Mother-in-law's 80th birthday in 2016, we were all together even relatives who live overseas. 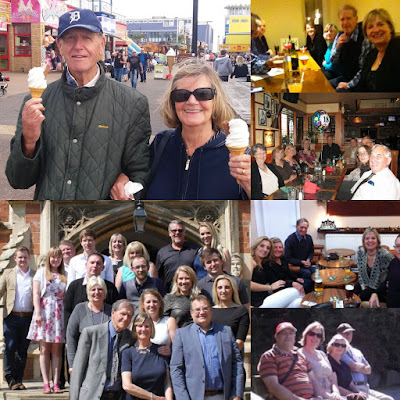 Today was Opening Day for Needlecraft Haven's Christmas Exchange. I have opened my parcel, it's superb .... I'll be able to share soon once my parcel has been opened by my partner. It's a secret exchange so as yet I have no idea who my parcel is from.

Last week we (Hubby, myself and Mother-in-law) spent a few days in Cardiff visiting our daughter and boyfriend. Today is his 30th birthday so we helped him start the celebrations a week early.

This is their first Christmas in a flat of their own, no more sharing with others, so I stitched a special ornament for them. The chart was an Etsy purchase from BirdSaysTweet, it came with three other designs which are all lovely. 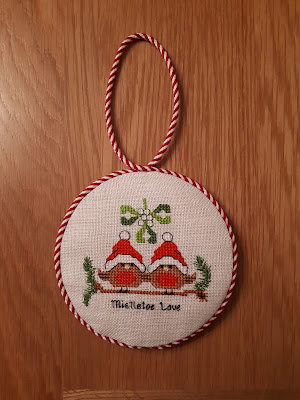 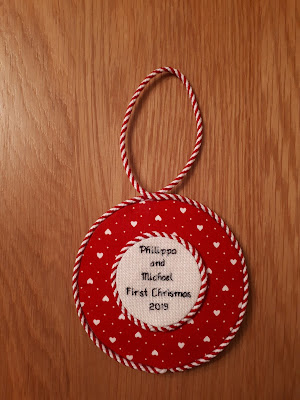 Our daughter is also crafty, she has been making things for their flat for Christmas and also for his big birthday. She surprised us with a beautiful Christmas wreath - I'm not sure it will be put away after the festivities. 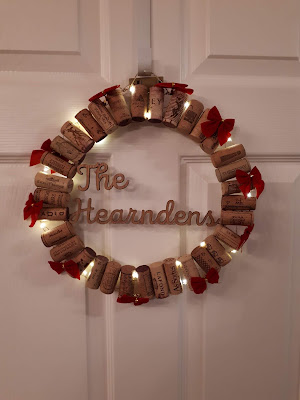 And so the Christmas preparation begins ... enjoy it all, it is a special time to show love and care to all.