We're back from fortnight at the caravan. The weather was mixed with one of the best days being the day we left - typical.
The first few days Michael was with us; we did not go out much over the fortnight as Ruby required quite a lot of attention. Monday I did an hour helping out at the church coffee morning, then the others came and we went to the market. There was nothing new there but it was good practice for Ruby to be around so many people. Michael came back to Nuneaton on Wednesday, he came by train on his own for the first time. He was a little nervous but met his girlfriend at Birmingham New Street so they spent some time in the city before coming home.
Nick spent quite a few days boxing in the bottom of the caravan. He had to dig out some holes for the supports but unfortunately Ruby decided to help too, she got it a little wrong though as she was pushing the soil back in, oops. The finishing wood came last Monday and it took Nick three days to get it up. Philippa helped with painting, it all looks very good. Lots of our fellow caravaners have been looking and commenting, we just have a few bits to finish off. 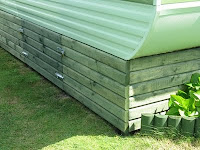 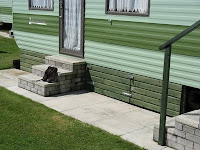 I spent most of my free time (there wasn't much) stitching my JA Mail Art which is now finished and can be posted on Monday. I took my JA Christmas SAL pieces but did not get a chance to do any of them. I also took some books but didn't open one. But I did spent Sunday evening making some cards for church. I forgot to take my inners and my finishing envelopes so I've had to bring the cards home to finish. We're back on Friday so I can take them to church next weekend. 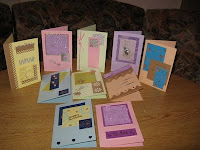 I saved my orts from hols - it looks like I've done loads of stitching but I did not save any smallish threads so some pieces are quite long. 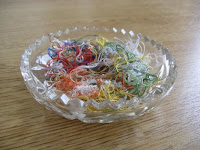 I've added them to my jar - it is growing surprisingly quickly. 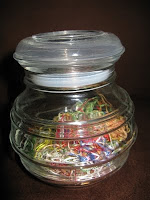 We did have a trip out to Denbigh, St. Asaph, Rhuddlan and Rhyl. I used to holiday (on scout camp) in this area when I was younger. It was a fair way but we had a good day out if a little windy. 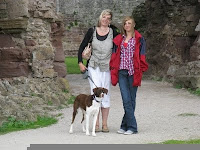 We have been walking so much this holiday - which is a good thing as I have not been very good on my diet. I forgot my book and scales and gave up guessing. I know I have eaten too many extras; not looking forward to Tuesday weigh in but will have to go.

On one of our regular walks we have to go along side a drainage ditch. There is a lovely family of swans there and the other day we were amazed to see them on the side all asleep, they did look cute. 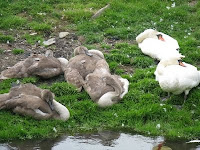 Every summer for over 25 years the Cambrian Steam has run along the coast. It's a fantastic sight and runs past our caravan park in the morning and back down at night. The kids all stand at the crossing to see it. British Rail are changing the track to fit in with some European rule and the trains have to have new computer technology. Unfotunately the old steam doesn't so next Friday will be it's last run. It is such a shame but we have read in the local paper that they are working on the problem and it may run again sometime in the future.

I am having a little trouble with my left arm, in fact it is uncomfortable to type this. The first Sunday we went to a small beach and let Ruby have a run (her first so we were nervous). She flew off and we chased after her. The beach was actually clay with sand on top and was like a skating pond. Philippa managed to stay upright, Michael went round the edge, Nick stayed on the rocks but I went skidding along and BUMP on my behind - it was funny cos I was still holding the dog biscuit high, calling Ruby. My trousers were covered in sludge and I had to hitch my way off the slippy patch cos I couldn't stand up LOL. Anyway all week my left arm has felt very heavy, and for a few days my wrist hurt but I thought it was just a strain or jar. Two weeks on it is still painful from my elbow to my wrist - it is a heavy ache and feels like it's the bone. Michael had a look tonight and when he touch an area just above my wrist it was very tender. He thinks I have a green stick fracture and suggested I go the docs on Monday. I must admit I did not think it would ache this long after doing it - I'll see how it goes but am thinking I should get it checked. There is no obvious sign of damage and my use isn't restricted; it just hurts.

This final picture is Philippa and Ruby in the back of the car waiting to set off. Nick had tried to take one but Philippa hid her head, but I sneaked this from inside the caravan through the door on full zoom. I think its a fab picture of them both. 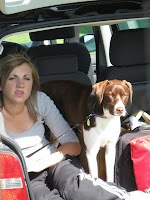 Sorry my blog is a long one, thanks for popping by, I will be catching up over the next few days with everyone's news.
Written by Clare-Aimetu

Thank you for visiting Aimetu's Stitching - I love reading your comments, thank you for sharing your thoughts, they are very much appreciated, thank you x

Clare-Aimetu
I live in the UK and have been crafting for over 25 years.